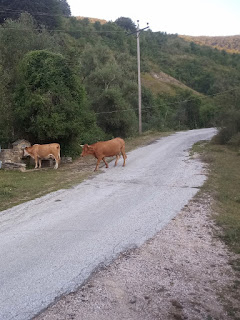 Blogging at 22:30 on Friday 5th August from intended overnighting spot N 40.67322°, E 21.44266° / http://maps.google.com/maps?q=loc:40.67322%2C21.44266
The scenery today has continued to be utterly stunning. We've again bumbled very slowly through the mountains in the north west of the country and roughly followed the line of the Albanian border.
It really is spectacular country, with every twist and turn in the almost totally untrafficked roads revealing extraordinary vistas. This is clearly not a part of Greece that suffers summer tourism. In the past two days we've only seen one other non-Greek vehicle and that was a German-registered panel-van camper.
Some of the terrain has been pretty severe. Much of the day has been spent in the low-ratio box and also trying to be kind to the brakes. Fair to say they've been a bit hotter than I'd have liked, but then I'm sure the 38 deg C ambient temperature hasn't helped.
We've encountered a couple more suicidal tortoises during today's drive and also witnessed the utterly unexpected sight of a nightjar that was unfortunately dead in the middle of the road on a mountain pass. Goodness knows what went on there.
By sheer chance, lunchtime coincided with our arrival at the top of a mountain pass at 1498m and the cooler air and views from there were so awesome that lunch became a three-hour stopover. It was a brilliant place with constant bird and butterfly sightings including: short-toed eagle, red-rumped swallows; marbled white and southern white admiral butterflies, and a hummingbird hawk moth.
The place was so compelling that we also did some human-powered exploration. Emma ran and I biked. This is tough terrain for such caperings.
The late afternoon saw us tiptoeing through more mountains and en-route taking on some fuel (€1.84/l) and some more fresh provisions in a wonderfully air-conditioned Lidl.
We're now at the coordinates shown, hopefully for the night. It's a nice little dell next to a babbling stream complete with a drinking fountain from which free-range cattle and (presumably free-range) locals are slugging water in approximately equal numbers.
Tomorrow should see us entering North Macedonia where costs prohibit mobile use, so we may be under the radar for a few days...
Sent from my mobile device
Posted on: Saturday, August 06, 2022