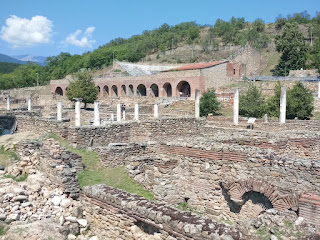 Blogging at 22:00 on Saturday 6th August from intended overnighting spot N 41.72378°, E 20.67047° / http://maps.google.com/maps?q=loc:41.72378%2C20.67047
It was a bit of a wrench to leave northern Greece and we really do hope to return to explore further when time permits. It was truly fantastic and, as if to seal the deal, just as we were heading for the border it threw up one last excellent sighting in the form of a Montagu's harrier.
Crossing into Macedonia was fairly uneventful but for the first time ever (that I recall) the border officials demanded production of our insurance green card. Once they'd given that a good going over, we were pretty much on our way.
Things started well with pretty casual and almost immediate sightings of several white stork, glossy ibis and a crested lark.
First port of call in Macedonia was an archaeological dig / restoration site called the Roman Theater of Heraclea Lyncestis (pic). And quite impressive it was, too. As is well accepted, the sophistication of the Roman civilisation back then was astounding and the ancient site even housed a contemporary museum. It took a few seconds to process the fact that almost 2000 years ago the Romans were so advanced they maintained a museum of pre-Roman artefacts. Naturally, the site also boasted thermal baths, an amphitheatre, religious buildings and further trappings of a very organised society. As per previous rants, modern-day Italy just does not feel 2000 years ahead of this. Or even 200.
From the site we headed north and, following the super-chilled drives through Greece, were brought back down to earth with a bump. To describe Macedonian driving as hectic is an understatement. It's nuts. Ignoring red lights, driving on the pavement, driving head-on into oncoming traffic, and all whilst jabbering away on the mobile all seems pretty fair sport. Fair to say we've been very careful.
Part of the drive took on lake Ohrid, which is designated as internationally important because of its depth and it's aquatic ecosystems. From a birding perspective it was - on the face of it - pretty ordinary; though it did sport a lot of pygmy cormorants.
The humanised areas of the lake were pretty hideous. The whole place was rammed with tourists and sported almost Montenegrin levels of landfill rubbish. Additionally, some of the streams that run through the built-up areas of the lake had that distinctive and delightful smell of open sewer.
To be honest, though some of the mountainous landscapes are undoubtedly spectacular, and though there is evidence of some localised efforts at civic pride - such as some really cool roundabout art - from what we've seen so far the country is most kindly described as unkempt.
So quite why it's so incredibly rammed with tourist is beyond us. We've seen cars from about 20 different nations, from all corners of Europe, including some as distant as Sweden. By far the most common, though, are Austrians Swiss, Italians and Germans.
It's actually all a bit perplexing. Foreign registers cars are extremely common here and perhaps comprise at least a quarter of all traffic. They are, though, in the main just cars: without even a nod to touristy-travelling-around in the form of roof rails or a top box. a good proportion of the Germanic-country cars are also driven by men, with no one else in the car.
Quite what's going on, and quite why this country is seen as so attractive is utterly baffling. We've literally only seen two self-contained touring vehicles, one was a Dutch A-class motor caravan and the other a very nice looking German Iveco Daily based full-on overlander.
Anyway, we're now at the coordinates shown where we're intending to kip. It's next to a wonderfully clear and clean crashing mountain stream in the Mavrovo national park, which is reportedly home to some apex predators including wolves, bears and lynx. The most exotic thing we've seen here to this point have been flocks of crag martins and a dipper, but you have to be in it to win it.
Indeed, we were lucky to score the spot, anyway. The main road up through the park was busy with mostly foreign traffic and every potential stop-off space we passed was occupied with people either fishing, having picnics or plain old landfill.
The 'road' we're now next to is unsigned but according to OsmAnd purportedly leads to Kosovo. The reality is that it's utterly neglected and is no more than a bumpy, extremely narrow track that's being pretty quickly reclaimed by nature. The truck didn't really fit up it as far as we got.
It would definitely be a challenge to have a go at more of it in the truck, but the landscape and habitats further along it do look pretty tempting. If we could get through, it would also save traipsing through further reaches of mainly urban Macedonia to reach Kosovo...
Sent from my mobile device
Posted on: Tuesday, August 09, 2022