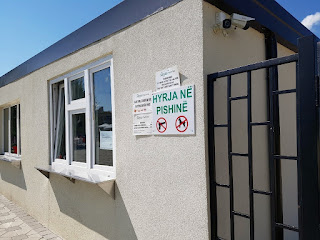 Blogging at 19:30 on Monday 8th August from intended overnighting spot N 42.27229°, E 21.53483° / http://maps.google.com/maps?q=loc:42.27229%2C21.53483
Lying in bed last night we heard unusual owl calls that we couldn't identify. More work needed, but we're currently suspecting Tengmalm's owl.
This morning saw the lowest temperature we'd recorded on the truck since the start of the trip. Largely because we'd slept at about 1600m or so, we saw 19 deg C!
We've had a steady driving day, today. Once descended from the Sharr mountains we basically bumbled through the relative lowlands of Kosovo just to see what we could see. The country definitely comes across as proud and there's far more of a trend towards civic pride than in Macedonia. There are still horrible litter-in-layby issues and more than the occasional fly-tip, but on the whole it's less of a dump than some of the other countries I've moaned about on this trip. It seems that the country is embracing the concept of the EU and it wouldn't surprise me in the least if membership was an aspiration.
In both Macedonia and Kosovo there's clearly a huge Albanian presence and influence. It's been common to see cars adorned with Albanian flags and also entire communities flying the flag from most dwellings. We know from previously visiting Albania that gun ownership is very common and one sign we saw at the entrance to a restaurant pool complex today (pic) gently suggested that as well as dogs, the proprietors would really rather guests didn't tote firearms. It seemed to us to be a perfectly reasonable condition of pool use. There are also lots of memorials around and about dedicated to Albanians lost in the conflicts that saw Yugoslavia torn apart.
The friendliness of Kosovans has continued unabated. We've had no end of nods and waves and every time we've been parked up at least some of the people passing have taken the time to say hello.
As with Macedonia, the predominant religion seems to be Islam, elaborate mosques are omnipresent and most cemeteries we've seen belie the Muslim faith. That said, most people seem to be quietly getting on with their spiritual belief: there are very few displays of the more obvious Muslim conventions in the way of dress or appearance.
The landscapes away from the mountains are pleasant enough and casual observations as we've driven would seem to suggest butterflies are very well represented here. We've also seen red-backed shrike for the first time on this trip.
A late afternoon recce on the bike produced the intended overnighting spot and from here we have excellent far-ranging views over surrounding hills that are a mix of forest and clearing. We'll be spending some time scanning for big mammals.
By good fortune, we're also right next to a spring that, like a lot of similar ones we've seen in the southern Balkans, has been turned into a formalised faucet-and-trough affair. A couple of local working vehicles that have passed have stopped and the occupants have filled up plastic drinks bottles; so we've (eventually, and after some spirited discussion) taken the opportunity to copy and top up the truck's fresh water tank.
Fair to say we have different views on such things and Emma-the-risk-averse has already put in place a zombie-apocalypse scale action plan to avoid contact with the truck's water supply for the remainder of the trip. I should mention our system involves pre-filtering water going into the tank, chlorine treatment of the contents, a coarse filter between tank and pump... and then a final faucet-mounted carbon filter.  And the locals just drank straight from the spring, anyway.
As a result of this hubris, I now fully expect to have the squits.
Post intentional contamination, I had a wander around and spotted more red-backed shrike, bee-eaters and found yet another fantastic butterfly meadow.
Right, time to spot some big mammals...
Sent from my mobile device
Posted on: Tuesday, August 09, 2022