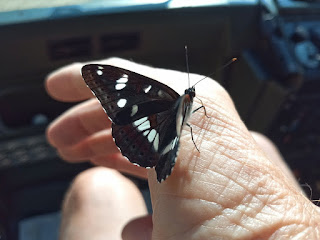 Blogging at 22:30 on Tuesday 9th August from intended overnighting spot N 42.26122°, E 22.57185° / http://maps.google.com/maps?q=loc:42.26122%2C22.57185
No big mammals last night but we were treated to a splendid moonscape along with an excellent cicada and grasshopper symphony.
First thing this morning we moved from the overnighting spot to a flatish bit of track close by where Emma ran whilst I had a poke about around a bit of scrubby meadow that was teeming with insects. Fritillaries, skippers and blues were present in huge numbers, as were white admirals, purple emperors and scarce swallowtails. I also spotted a painted lady and a hummingbird hawk moth. The white admirals here also seemed to be partial to English sweat (pic). Some large and colourful flying beetles were out in numbers, too - but I have no idea of species.
By mid morning we were at the Kosovo / Macedonia border right in the south east of Kosovo and facing the usual inquisitive police, immigration and customs officers. Leaving Kosovo was no great problem but re-entering Macedonia kind of was. The crossing we'd approached was apparently only for private cars and not for commercial vehicles of any description. It became apparent that the only road leading away from the checkpoint on the Macedonian side of the border was subject to tight controls on goods / heavy vehicles and this was why we couldn't pass.
The Macedonian staff were very polite and respectful but pretty steadfast. They had got a little hung up on the category of vehicle that was shown on our green card: i.e we had a tick in the 'truck' box, rather than 'car' or 'other'.
I explained in some detail about the official registered status of the vehicle back in the UK and showed them sections of the log book that indicated the vehicle was - in spite of its ancestry - now a private passenger vehicle and was no different to any other camping car, apart from its size.
The Kosovan officials who'd let us out seemed to agree and seemed to communicate this to the Macedonians in machine-gun type language, whilst gesticulating at the truck's interior and bike garage.
The Macedonian official retreated temporarily and then returned with a large chap in (very) casual clothes with a strip of material on his (very) casual and ill-fitting top proclaiming 'Doctor'.
The Doctor cast an eye over the truck, had conversations with both the Kosovan and Macedonian staff and then proclaimed all was well. Phew! The Doctor's good judgement saved us a massive detour / re-trace to the border point we'd come in at.
We also made a mental note that it would probably be best not to need healthcare in Macedonia.
And so we pootled into and through the country's north east. Credit where it's due, we found this side of the country far less frenetic, more rural and altogether far more appealing than the bits of Macedonia we'd seen thus far. The sinister-looking German sports saloons on Swiss, Austrian and German plates were still evident, as was casual landfill; but neither were quite as prevalent.
The landscapes were altogether more benign, too with lots of semi-managed / unmanaged scrubby meadows that were well populated with birds. Red-backed shrike and warblers seemed to be the most common. We agreed that If we'd have entered Macedonia from this side, and this had been our initial impression, we may well have seen the rest of the country with more forgiving eyes.
Final task of the day was to take on fuel. We'd sussed prices in Macedonia and Kosovo and Macedonia won hands down. We filled up at the equivalent of £1.23/l.
The second border crossing of the day saw us facing a stern-looking Bulgarian officer who, after entering the truck's registration into his computer told me the MOT had expired. I told him it hadn't and was able to produce it. After a quick scan he was satisfied. This was another first: no other border has ever seemed concerned with or queried the MOT status and, for sure, Macedonia and Bulgaria both proved red-hot on the green card. The motor caravan status has definitely helped in these parts, so anyone coming over might want to pay attention to documentation.
Another quirk with Bulgaria is their vignette system. I'd researched it before we set off but found it hideously complex and full of contradiction so decided not to pre-buy and instead to sort it at the border; where we could once again explain that though we were 7.5t and on a truck base, we were actually a private passenger vehicle.
Basically, you can't use any Bulgarian connecting roads (so cannot venture beyond the confines of any conurbation) without a vignette. On top of that, larger and / or commercial vehicles also attract separate tolls.
It proved to be the best move to wait till we'd arrived as a kind toll-official who was on hand once through the checkpoint was able to lead us to a booth where ATM-type machines were lined up to allow purchase.
He, at least, was happy the truck should attract a simple car rate and so one swipe of the credit card and 50 Bulgarian Lev lighter (about £7) we were free to subject ourselves to the electronic system that monitors the scheme. Here's hoping...
It had been a busy day so basically, as soon as we arrived I went for a recce on the bike. One hour and one dog chase later I was back at the truck and heading for the spot we're now at. It's nice enough for a stop-of-convenience and, most importantly for us, we're highly unlikely to be discovered.
Sent from my mobile device
Posted on: Wednesday, August 10, 2022