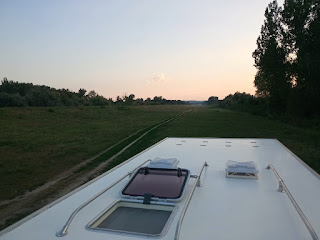 Blogging at 21:30 on Monday 15th August from intended overnighting spot N 44.68880°, E 20.90967° / http://maps.google.com/maps?q=loc:44.68880%2C20.90967
We were woken at 03:45 by strident yipping, yowling and barking, and whatever was making the sound was moving closer to the truck. They were unusual sounds; ones we've never heard before, and pretty quickly ruled out dog, deer, fox and wolf. We tried to be stealthy and, equipped with bins, popped the roof hatch. Unfortunately the briefest of creaks from the hatch silenced whatever the animal was and it was gone. We need to do more work with sound files when we get back but golden jackals are supposedly doing quite well in Bulgaria and the description of the noises they make is pretty much what we heard.
Come daylight we found fresh tracks in some mud near the truck: they were definitely canid and the animal had been no more than about 75m from us.
The excellent birdlife continued this morning and it was a (sort of) pleasure to take a run amongst turtle doves and the tropical calls of hundreds of bee-eaters. Temperatures didn't help with the run, though: we were back up into the 30s by 9.00am and yesterday's rain was a mere memory.
From the overnighting spot We ditched the wretched Road 1 and cut across country to drive the last hour or so of Bulgaria up to the Serbian border. Unsurprisingly (by now) the country changed it's face yet again. Towns and villages approaching the border were much more affluent and there was a good deal of civic pride on show. It was a nice way to leave the country and one final sighting of another lesser spotted eagle sealed the deal. It's altogether an excellent destination for landscapes, flora, fauna; plus a good deal of weird. The people have been nice and, apart from when in some of the rougher towns, we've felt entirely at ease.
Crossing the border was quite a slow affair and, once again, the Bulgarians were very, very keen to check the truck's documents and particularly the vignette. It's fair to say that we probably saw more roadside police and toll-officer enforcement in Bulgaria than any other country we've ever visited. This is not a place to be glib with traffic rules and regs. Of course, it's less of a problem should you wish to fly-tip your old kitchen in a lay-bye full of prostitutes.
Entering Serbia was also quite a slow affair and we noted that the sullen-faced immigration officer checked every leaf of both our passports for Kosovan stamps.
Fortunately, thanks to the truly helpful officers at the Kosovan border who had predicted this scenario, we were clear of any betrayal that we'd had the audacity to visit a state that Serbia still refuses to recognise. I anticipate that, like many before us, we'd have been refused entry into Serbia with Kosovan stamps in our passports. Or at least I would. Emma's Irish passport seems to be magic.
Once into Serbia we immediately perceived an altogether more sanitised and organised country. Streets were clean, houses smart, and infrastructure in good shape.
The day's been spent mainly covering ground but that hasn't stopped us appreciating some superb mountainous landscapes and upland meadows that were redolent of those found in the Swiss or Austrian Alps. Traditional sheaves and haystacks added to the allure.
The eastern mountains made for slow going originally, but by mid-afternoon we hit some flatter land and made some progress.
I made a friend at an afternoon tea stop: a street dog living in a roadside rest / spring-water lay-bye. Throughout the Balkans feral dogs have been very common. They're nearly always incredibly wary of people and almost always subservient. Many roam in loose packs but many also go solo. They're literally everywhere from urban areas to mountain ranges but are rarely any bother; apart from tugging at heart strings. This little fellow was particularly docile and was favouring one rear leg. He responded to any attention by a hint of tail wag and just oozed potential loyalty.
Emma fed the waif to bursting before we left him to milk the next suckers who stopped by.
Tonight's intended overnighting spot is a vast tract of rough grassland alongside the Danube (pic). It looks like it's in the ownership of whoever is responsible for Serbian flood defences but it's being used by fisherman, nomadic goat / sheep herders, bee keepers, the occasional local dog walker and two gringos in a truck watching the world go by.
It's proved to be a decent spot (apart from some irritating distant music) and has produced spotted flycatcher, golden oriole and a lesser-spotted woodpecker: as well as yet another musical bee-eater colony and the usual stuff besides. Brown hare and quite a few ground-foraging buzzards are also around.
The grassland is teeming with all manner of species of grasshopper; dragonflies are prevalent, too. There are also, on this occasion, genuinely problematic numbers of insects that would prefer to / be happy to bite and sting us to result in a rare and cordial agreement to deploy all flyscreens: in spite of the temperatures and humidity.
Normally, something like one hornet two (or more) miles away provides the source material for the very opposite of such cordiality.

Sent from my mobile device
Posted on: Wednesday, August 17, 2022