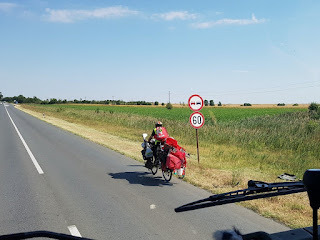 Blogging at 21:30 on Tuesday 16th August from intended overnighting spot N 45.85185°, E 19.05089° / http://maps.google.com/maps?q=loc:45.85185%2C19.05089
Last night's intended overnighting spot turned out to be more of a partial overnighting spot.
We were stridently awoken for the second night on the trot, this time at 3.30am... but by the far more troublesome sound of gunfire. The first shot had us awake immediately, so come the second and third shots, ripped off in rapid succession, we were able to assess very quickly indeed that this was all far too close and altogether far too dangerous.
We immediately lit the interior of the truck to let what we assumed were hunters know we were there and within seconds I'd pulled on some shorts and headed to the cab. As I did so I could see the culprits, they were about 150m or so behind us and were lamping.
I stuck all the truck lights on, started the engine and moved off smartish whilst Emma stayed in the back for safety / expedience. We always go to bed leaving everything more or less in a travelling state precisely in case we have to do what we had - on this occasion - to actually do. It rarely happens, but last night's was definitely one where a brisk departure was preferable.
We have no idea if the shooting was legal or not but it couldn't possibly have sat well with the nomadic herders, the people who were night fishing, nor a bloke who'd tethered a horse in the tract of grassland being lamped. These were not airguns or shotguns, we had closely encountered bullets from rifles: they were the real thing.
And so, we spent the second half of last night less ballistically compromised about 2 miles east, and in an arguably better birding spot, too. Being greeted by golden oriole song as we awoke (naturally, this time) was no bad start to the day proper.
After departure we saw a whole different topography to yesterday (and the past three weeks) with just about every bit of countryside we've passed through being entirely flat. The vast majority of land we saw was given over to formal agriculture but this was not so aggressive that it didn't also support lots of rough land left to nature with lot of fields left fallow. There's probably a reason why there are so many grasshoppers here and hardly any left in England. Of course, everything thrives given the opportunity, and the sighting of a couple of honey buzzards as we pootled along would tend to suggest food chains here are at least half decent.
The towns we passed through were all smart enough and the people seemed nice. We had a few waves and on the couple of occasions we stopped in conurbations we had some younger lads with a few basic words of English asking where we were from and enjoying the truck.
Alongside the more 'traditional' farming methods we witnessed we also saw some other throwbacks to the past in the form of manually pumped wells and quite a bit of hand hoeing and scything.
A few cemeteries we passed had a similar arrangement to the Italian ones we'd seen except on an even grander scale. Some (presumably wealthier) clients were laid to rest in buildings that looked for all the world like miniature houses.
Towards tea-time we stopped for fuel (equivalent of £1.49/l) and treated ourselves to a chocolate iced lolly each to help with the 36 deg C temperatures.
Just as we'd started to enjoy the lollies we came upon a closed road and a diversion. The diversion was down a narrow street with oncoming vehicles, pot holes, speed bumps and low overhanging trees. This needed both hands so I dutifully (if reluctantly) handed my lolly back to Emma... just as we hit a speed bump.
As we dropped off the bump there was a really unusual sound. It sounded like something had failed quite spectacularly. All gauges were good, the truck felt no different and all I could think was that one of the overhanging trees had been sturdier than appeared and had done some damage to the box.
It was just about then that Emma-the-observant worked out the problem. Her case was helped by the appearance of tiny shards of sticky chocolate liberally and evenly spread around at footwell level. A piece of my lolly's chocolate coating had dropped into one of the four cab-cooling fans we use and had been shredded in cartoon-stylee: along with the suitable sound effect.
A slightly diminished lolly experience and the subsequent clean up of chocolate-spattered footwells was no bad result given the multitude of immediate concerns that ran through my head.
Not long after the shredding incident we pointed the truck up a track and are now at our intended overnighting spot. There's not been much about apart from the odd shrike and a marsh harrier but it's quiet, completely out of the way, and has been a good base for a spin out on the gravel bike on the seemingly endless tracks that run through the seemingly endless arable, under definitely endless skies.
Speaking of bikes, throughout Serbia we've literally only seen two cyclists (I was the third) but one of them was more than worthy of mention (not me). The pic does most of the heavy lifting in terms of description but the bottom line - and I write this as someone who's done a fair bit of cycle touring - is that unless there was some compelling reason for this caper, this chap would almost certainly benefit from some suitable professional intervention around an alarming hoarding compulsion.
Sent from my mobile device
Posted on: Wednesday, August 17, 2022