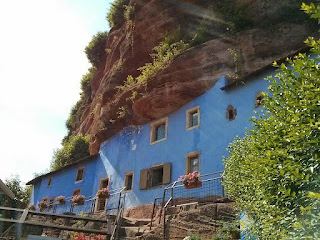 Blogging at 21:00 on Tuesday 23rd August from intended overnighting spot N 48.86448°, E 06.96982° / http://maps.google.com/maps?q=loc:48.86448%2C06.96982
After breaking camp we were quickly into France and specifically Alsace. It's another place we really like and, if time permits, we try to bumble through extra slowly. Today was such an occasion and, accordingly, we meandered roughly east to west down tiny roads. Sometimes very tiny roads.
As per reputation, Alsace really does betray a mixture of French and German cultures and they are mixed in such a way that appealing bits of both are captured. Furthermore, on the face of it, they seem to compliment each other very well.
Everywhere is immaculate and organised but it's also very quaint. It's quiet, relaxed and very civilised. Place names and architecture are very Germanic, but boulangeries and such French traits as the mysterious disappearance of an entire village's population at around 2.00pm each day are the norms. I suppose it's reasonable to assume - given the German influence - that the collective mysterious disappearances now happen at precisely two o'clock.
Once you throw in Alsace oddities like the troglodyte houses of Graufthal (pic) and other well-reported attractions, the region is arguably well worth a visit in its own right.
By mid-afternoon we were approaching over-stimulation so found a forest to disappear ourselves / find somewhere to overnight (coordinates). From here we've had a steady time of things (apart from a quick spin on the bike on my part) and as well as the usual lazy gazing through binoculars at animals, have had yet another spirited discussion about insects.
We agreed that the best animal sightings have been two roe deer fawns and a black woodpecker. The issue of insect-related risk assessment, however, remained unresolved.
For almost the entire time we've spent here I've been outside or on top of the cab attired in only a pair of shorts, whilst Emma has mainly been hermetically sealed in the back of the truck.
I didn't see many insects at all: Emma saw loads. Neither of us were bitten / stung: only one of us was mercilessly harassed by hornets.
Sent from my mobile device
Posted on: Wednesday, August 24, 2022