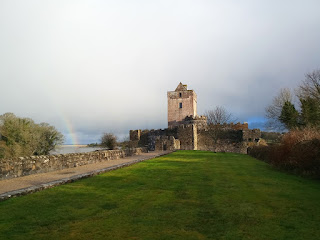 Blogging at 20:30 on Monday 26th December from intended overnighting spot N 55.22449°, W 07.81376° / http://maps.google.com/maps?q=loc:55.22449%2C-07.81376
We've had our fair share of weather today and have encountered everything from clear blue skies and photogenic sunshine, through hail and sleet, to a full-on snow-dump.
After breaking camp a steady trundle generally north saw us at Doe Castle (pic) well before lunch, where we had an enjoyable leisurely stroll around between dodging sleet showers.
Thereafter we headed further north still, to the Rosguill Peninsula. This is a headland we've never done before, but which had been recommended.
It's pretty spectacular. For an extended lunchtime we perched fairly precariously on some high ground with spectacular Atlantic views. It was pretty wild with the truck being rocked about in the bitingly cold winds. The Atlantic was angry and heaved and crashed restlessly under ever-changing light conditions. One minute it was brilliantly lit, the next barely visible in a hail-squall. Whilst we cracked up the heating and donned an extra layer it was humbling to watch gulls and gannets plying the raging winds seemingly utterly effortlessly; simply undramatically getting on with the stuff they've been doing for millennia.
Naturally, the most logical thing to do in these conditions would be to run around part of the headland, so that's exactly what Emma did. The least logical thing to do would be to stay warm in the truck whilst gazing open-mouthed at the seascape: so that's exactly what I did.
Following our choices, and with one of us pink and one of us blue, we pootled round a bit more of the spectacular peninsula before parking up quite early at the spot we're now at. As before, we wouldn't ordinarily overnight in a formal car park but the season is cutting us some slack and the views from here are pretty rewarding. As well as watching a seabird roost comprising thousands of birds form in the day's dying light, I've also spotted a few porpoise and a common seal not far from the beach.
As the evening progressed the skies once again cleared and we have some splendid open-sky views featuring a brilliant new moon.

Sent from my mobile device
Posted on: Tuesday, December 27, 2022