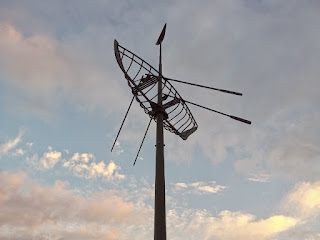 Blogging at 21:15 on Tuesday 27th December from intended overnighting spot N 55.19580°, W 07.55135° / http://maps.google.com/maps?q=loc:55.19580%2C-07.55135
In spite of intentionally breaching our general don't-overnight-in-a-formal-car-park rule, last night was completely peaceful: apart from the thunderously crashing waves of the angry Atlantic. At times, when the wind conspired, it really was so deafeningly loud as to be genuinely menacing.
Whilst drifting in and out of sleep and half-registering the thunderous noise, I remembered the seabird roost I'd seen mustering on a series of large rocks actually out amongst the crashing morass and this was all rather humbling. It occurred to me that feeling 'menaced' whlst cosseted in a comfortable bed in a fully heated and totally dry truck 50 metres or more from the high-tide line suddenly seemed like the ridiculous exaggeration it actually was.
First up after breaking the camp-of-melodrama was a stop off at Woodquarter, the site of some winding tourist trails set in mature mixed woodland alongside Mulroy Bay. We both ran steadily from here (we even ran together, for a bit) and again enjoyed optimistic bird calls signalling the first murmurings of a returning spring.
After the benign feelgood of Woodquarter, Barclays PLC again decided to redress the balance of the day by once more blocking my debit card: this time whilst I was on a vital mission to restock our severely depleted commodities of Pringles and cheese at a conveniently open Lidl.
A lot more swearing happened.
As a result, lunchtime at the fabulous Inch Wildfowl Reserve was an unsatisfactory mixture of choking down Pot Noodle... whilst trying to spot rarities... whilst all the while on speakerphone to the said bank hoping to persuade them that at some point it would be nice if they might actually deign to allow me to spend my own money instead of just keeping it all for themselves and - to boot - exacerbating the humiliation I already routinely endure by blocking my transactions whilst attempting to buy grotesquely unhealthy junk food in places like Lidls. When the checkout operative in Lidl looks at you as if you're a cut below their usual clientele, you know things are bad.
I think Barclays PLC realised I was both very irritated and truly eating a Pot Noodle, so the nice operative promised to actually reinstate my debit card this time and gave me £25 in compensation towards buying some proper food at a Waitrose.
Post Inch we headed to Fort Dunree. We've overnighted here before. It's a splendid spot for overlooking Lough Swilly and we spent ages looking for cetaceans. That drew a blank but the Fort is an intriguing place, nonetheless. It's a deeply historic site and has served many-a-strategic military purpose over the years. These days, its military and deeper cultural history is intertwined into something of a mish-mash that incorporates all manner of humanity vaguely associated with the area (pic). It feels like it's slightly lost its way: but is arguably no worse for it.
It's definitely worth a visit and definitely worth an investment of time and attention to unpick the various things it seeks to present.
Sent from my mobile device
Posted on: Wednesday, December 28, 2022