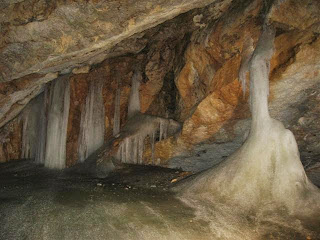 Busy day. Quick walk in the High Tatras where we saw more nutcrackers and what I'm pretty sure were pine grosbeaks, even though they aren't usually found this far south.

We then moved on to the Slovensky Raj national park where we did a world renowned ice cave. Cold air drops in during winter and the whole thing freezes, never to fully thaw. The ice is now 25m thick in places and there are some really cool formation's. It's the first ice cave I've ever seen and is certainly a phenomenon worth encountering. Quite odd too to be suddenly exposed to 0°C after the mid 20s immediately outside the entrance.

After the cave we headed for one of the famous gorge walks in the area; Sucha Bela. Basically there are a series of such walks where you walk up a narrow-in-places gorge carved out of the limestone by a river. It sounds easier than it is as in many places the river is inconsiderate enough to disappear underground or fall off the edge of rocks etc. In these places there is a series of platforms, ladders, chains and other cobbled together solutions to allow people who are daft enough to pass.

The whole thing is pretty demanding both mentally and physically but the rewards are great. The scenery is awesome and just doing the thing is really good fun in a mildly terrifying kind of way.