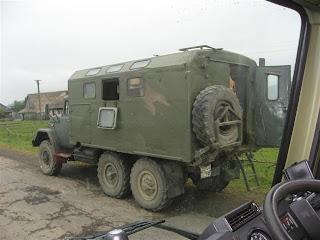 Well, we made it, though not without a false start. The first border crossing we went to turned us away as we were over 3.5 tonnes. The second was a 40km drive away and was a very formal affair. We were thoroughly searched and questioned, and our own - and the truck's - papers were scrupulously examined. We then had to pay a €2.50 road tax at the border bank before going back to border control to collect the truck's log book which had been retained until we could produce a receipt for the tax.

The whole thing took about an hour and a half but everyone was courteous. We also changed a bit of money at the border bank and amusingly were allowed to negotiate a rate for sterling. They wouldn't meet us though, so we changed some Euros instead.

People seem OK so far. Lots of cows being herded and grazed on the side of the road and lots of women working the land manually. A bit like Romania in that regard but there isn't the same sense of desperation and people here seem far more content. It certainly feels far less threatening.

Roads are truly as bad as their reputation. It takes ages to move anywhere. We have averaged about 20mph today. In fairness we have only seen 'B' road equivalents so far, no trunks or motorways, but the ones we've seen are just shot, often more like heavily worn tracks than roads. Sometimes there is a reasonable section for a few hundred metres and then the potholes and missing surface is thrust upon you without warning.

Seen two British touring motorcyclists and gave them a wave, and also a Canadian touring alone on a push bike. Respect.

Loving the old Russian trucks that are everywhere and have never seen so many Ladas.

Wildlife-wise we've seen a nutcracker, a black stork, and are currently being circled by an owl - but have no idea of the species.