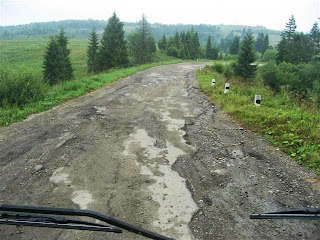 We have a new leader for worst-condition roads in Europe. As soon as we set off today it became obvious yesterday's experience was just a warm-up. Truly outrageous conditions for most of today's drive. It's taken about 6 hours of pure driving time to do about 80 miles. The truck seems to have coped but it's hard to see how a regular motorhome would survive. We haven't yet seen one here, but have seen a Land Rover based overlander in convoy with an overland bike.

At the end of today's drive I was genuinely spaced out and more than a little melodramatic. We've made do with a rough camp that's less appealing than we'd normally settle for but I could face no more crashing through foot-deep potholes whilst being overtaken by KAMAZ trucks and Ladas.

In fairness we've also discovered that the primary roads and trunk roads we've seen so far are no worse than some other euro-countries. It seems to be the secondary class and down roads that are the ones that are in truly crazy states.

Though not quite the landfill site that is Romania, Ukrainians clearly have little collective civic pride and every communal area seems to be fair game for rubbish disposal. Fair to say the further east we've come, the trend has been ever-worse for caring about surroundings.

One exception in Ukraine are the shrines that demarcate village boundaries. These are inevitably fastidiously kept and are sometimes hugely elaborate with gilt roofs and (commonly) electric blue paintwork. Jesus' crucifixion features at each one and sometimes the shrines extend to the size of a small church. These shrines are a feature in most of the continental countries we have visited but they are especially prevalent here.

Ukrainians seem pretty reserved and respectful; though they are obviously interested in us, they are not in our faces. They also, in the main, seem to be clean and dress quite smartly, even if they do seem happy to bespoil their wider environment.