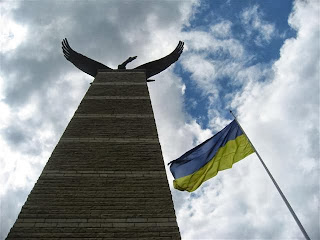 Last night's camp turned out to be a good one. Interesting to watch the old and impressively long workhorse goods trains pass by on crumbling bridges. We ended up as part of a loose community as a couple of fishermen and their families also tent-camped at the river / railway rough-ground area we'd settled for. Though there were a few goods trains through the night, their rumble was strangely and familiarly reassuring.

Decent roads saw us make ground and at lunchtime we chanced upon a heritage feature in the form of some kind of castle / stately home.

We went in out of curiosity and found it an odd mix of national treasure / art gallery / museum / jumble sale. We had no clue what we were looking at but enjoyed it anyway. We even bought a celebratory ice cream each, even if the transaction took a good 10 minutes of pointing and miming.

Afternoon saw us move to the Hungarian border where we blew the last of out Ukrainian currency on diesel (80p / litre). We now need to work out how to get hold of some Hungarian cash for the few tourist things we hope to do.

Had two mechanical issues. A pinch flat on my push bike whilst out training and a leak of transmission fluid from the truck's transfer box. The rough roads had shaken a couple of nuts fully loose from a cover plate and the remaining bolts had started to back off too. I have attempted repair with salvaged nuts and some metal 'glue' - fingers crossed. Good job I spotted the slight oil loss at a reasonably early stage. A day of dirty hands.

Now sat typing whilst listening to corncrakes which is something I've personally longed to hear again since leaving Hungary 3 years ago.