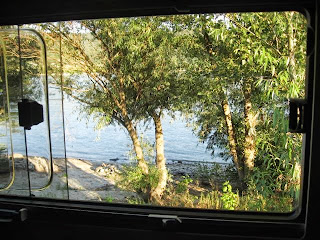 We had to cover some ground today and also spend the remainder of our Forints. It had the makings of a dull day then, but though we stopped at a supermarket, fuelled up, and covered a couple of hundred km on variable-quality roads, it turned out pleasant enough. More random friendliness and more unspoiled countryside made for another feel-good Hungarian day. On the down side the temperature has been well into the 30s again, which has been a bit wearing.

Because of the consistently high temperatures the polypropylene walls of the shower have bulged slightly in places but at least I'd predicted this and the 'screw-fix' I utilised when I recognised the issue during the build is keeping everything in place; so no major worries. The problem is being 'managed' and I'm pretty confident the original shape will return as things cool down.

Suspension on the truck is - following the experiences of Ukraine and some of the back roads of Hungary - simply too harsh. There is no escaping this truth and some head scratching is required.

Managed to reach the Duna (aka Danube) by late afternoon and found a really nice camp right on its north shore. 'Shore' is appropriate rather than bank, it is huge. Massive cargo vessels, many cruise ships, and hundreds of pleasure craft constantly ply its might. There's something stirring about it. Looking out over it right now with an almost full moon reflecting off it and the whole thing accompanied by an awesome cicada chorus.