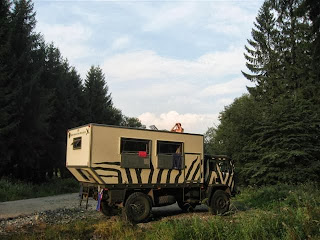 It was a real privilege to wake up next to the Duna and I spent an hour just watching the mass of different nationality passenger and cargo boats to-ing and fro-ing. Some really specialist craft about too, including a hydrofoil. Emma went for a pre-breakfast run rather than listen to me banging on about the skills needed to navigate such a complex watercourse.

Shortly after leaving the overnighting spot we were into Slovakia with a mission just to cover ground and get to Czech Republic in order that we might have enough time left to do some of the tourist type things we'd researched before setting off.

And so we plugged away stopping only for lunch and a lolly (30+° again), and in spite of a sat nav trauma that cost us about half an hour, we made Czech Republic by late afternoon. A good spot to overnight was found pretty quickly, from which I almost immediately spotted a black woodpecker.

Had a tough spin out on the bike too from here: big hill finish - felt unfit.

The other notable thing from today was spotting a very odd mammal that crossed a quite Slovakian country road in front of us as we pootled along. It was like a cross between a fox and a cat and my immediate reaction was civet; somewhat fancifully though. Will have to do some internetting on return to try to work out what it was. [Turned out to be a beech marten - didn't twig it at first as I thought they were arboreal but it turns out they are now living quite happily amongst humans in old buildings and such].