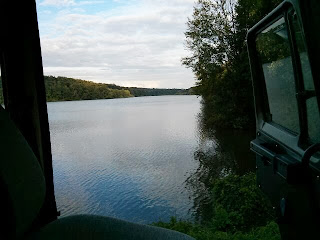 Last night, just as we were settling down to watch some TV, I noticed about a dozen winged insects, maybe flying ants, crawling around near one of the small 'background' LED lights. Not being too perturbed I set about coaxing them towards the roof escape hatch with my torch but suddenly, realised there seemed to be many more than I'd first noticed. This observation coincided with Emma, who I was intentionally keeping in the dark, saying she could hear it starting to rain. I already knew it wasn't rain and before I could tell her what was happening, and gently advise her to close all the windows, a scene of biblical proportions developed.

We were besieged by hundreds of the creatures. Emma helped in recovering the situation mainly by puffing her cheeks out, sporadically hyperventilating, shouting at me, and waving her arms about frantically.

Eventually, after some minor disagreements, we managed to seal the truck and then coax all the blighters into the shower room. I then had to take one for the team and stand In there with them crawling all over me whilst I could unscrew a roof vent net to allow them a means of escape. A light placed outside on the roof of the truck saw order restored after about an hour.

Wrong place / wrong time. Whatever the trigger, they had swarmed just where we were at exactly the time we were there.

Huge thunderstorm followed and today has been much cooler. This has helped really as we once again had to cover ground today in order to get to the stuff around Prague that we want to see. The drive was nice though with some very fetching countryside between Brno and our current location.

Overnighting spot a little tough to find tonight. Lovely view over a lake with fish jumping had to be overlooked in favour of a grubby gate hole a couple of hundred metres away due to just a little too much traffic (car every 5 mins or so). At least the gate hole is very, very peaceful.

We both agree that we generally prefer Czech Republic to Slovakia but that neither are a patch on Slovenia, or what is probably the best county in Europe to motorhome in - the under sung and largely ignored Hungary.