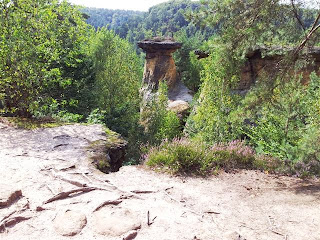 It was a bad start to the day. We had travelled to the area north of Prague specifically to see a series of attractions, including some famous bizarre rock formations. I punched the (pre-researched) 'rock' coordinates into the sat nav and set off for the 30 minute journey only to find us progressing to a series of ever-narrowing lanes leading into dense woodland.

Sure enough, our cheerfully announced 'arriving at destination' was a bit of random wood in the middle of a bit of random nowhere. A quick check on Google revealed the actual coordinates were about 100K NE and well and truly unachievable.

'Discussions' are ongoing regarding just how these coordinates were quite so off. Emma blames Wikipedia; in the name of domestic harmony, so do I.

We abandoned and set off for a castle an hour or so's drive away. The roads were tortuous, narrow and heavily tree lined but the scenery and villages were jaw-droppingly spectacular, I personally reckon that the scenery here was the most attractive of all of the trip.

Emma did the castle, which turned out mediocre, while I did some man-planning. After lunch we made the most of the scenery by biking to some sandstone rock formations known as the 'pot lids'. Seeing the scenery from the bike was reward in itself but it turned out that the formations were icing on the cake. Essentially they are just huge slabs balanced on weathered outcrops but the effect is spectacular.

After a full afternoon of being pure tourists we put a couple of hours drive in to make some headway into tomorrow's journey where we hope to be able to find the mud pools and 'living geology' of the Soos Trails that are buried somewhere on the Czech / German border.

After that all we have time to do is drive for the three days that follow in the hope we can still make the ferry.

Truck doing well with only slight signs of wear and tear, biggest problem is sticking indicator relay. It's got worse and worse as we've progressed to the point I'm now having to flick the indicators on and off manually when it gets warm. Not that easy when trying to thread through busy city centres.