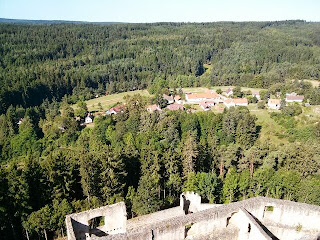 We had to move from last night's camp as we were under a pine of about 30 year's vintage. The problem was that the wind started to blow ahead of an electrical storm and Emma became convinced it would topple onto us.

And so, bleary eyed I drove out of the forest and to a castle car park about 3 miles away. The lightning was spectacular but I suspect the pine is still standing.

Anyway the castle proved a good one and we were amongst the first in, so enjoyed it before the hoards.

Reached the Slovakian border now but not going in until the morning. Incredibly hot - a strong wind is blowing but it's like being in a blast furnace. 35° in the back with every door and hatch wide open.