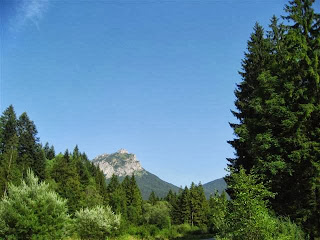 Last night was insufferable heat-wise, it just didn't cool down and stayed well into the 30s long after bedtime. We were going to head for Hungary today but have switched plans and instead we've headed for one of the Slovakian national parks in the highlands.

It's paid off and for the first time in ages we are able to function. It's a blessed relief to be able to do normal things like walk; without feeling stressed.

The park itself is very pretty with amazing limestone pinnacles and is supposed to hold populations of wolf, brown bear, eagle owl and beech marten. As always, it's incredibly unlikely we'll see any without a proper trek into the depths and staking out known habitat, but at least we are amongst it. Emma has seen what sounds to be a bluethroat whist out on the bike, a bird I've never seen.

Was worried about the vignette system but tracked down a policeman with a bit of English and he reckoned as long as we are officially a 'motorhome' we are OK as long as we are no more than 7.5 tonnes. Fingers crossed then, as virtually any road that actually goes anywhere in Slovakia is subject to hefty toll for anything (commercial) over 3.5 tonnes.