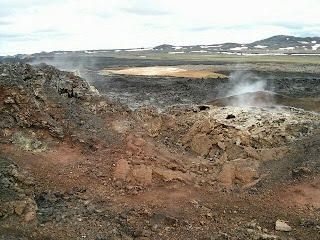 We're currently in the Krafla area - as per the coordinates - which is dominated by geothermal activity. It's apparently only 30 years or so since there were volcanic eruptions here and the ground all around is still angrily pumping out steaming sulphurous gas. It's extremely spectacular with new lava fields covering older solidified flows encrusted by moss and lichen, whilst the still-older substrate beneath has been around long enough for soil to form. It's rich and fertile as a result and hosts a huge variety of upland flowers, some of which are entirely new to me. All this is set against a backdrop of rugged and snow capped mountains. Extraordinary stuff.

Emma was like a kid in a sweet shop in the lava fields but heeded the warning to stick to the waymarked trails. There are stark notices that the crust is fragile and can give away under a person's weight. We didn't see any Americans here.