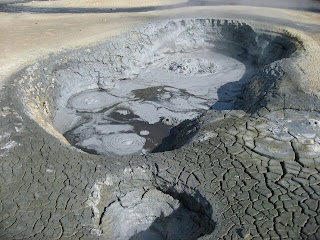 From the lava fields we headed a short distance to Hverir where there are some spectacular boiling mud pools and large fumaroles where stinking steam comes whistling through the earth's surface like a giant boiling kettle.

From here we started to head for lake Myvatn - which reportedly hosts the most breeding duck species in Europe - but almost immediately stumbled upon a small cave system called Grótagjá  (coordinates shown) that was apparently created as lava cooled. Flooding the floor of the cave is a water body that's heated to about 40 deg C. Apparently bathing used to be allowed but is now banned; pity as it would have been an experience to have lounged in toasty-warm subterranean water.

The surreal theme continues, every hour of every day gives up something utterly weird or spectacular.