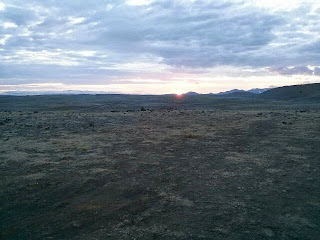 After much over-stimulation we decided to call it a draw leaving the birdlife of lake Myvatn until tomorrow. We found a spot to overnight next to a hill called Hverfell which looks - to our Yorkshire-trained eye - exactly like a colliery slag heap.

Not many gyr falcons over Yorkshire pits mind. I'd read that lake Myvatn had a population but expected them to be elusive. Showing me I know nothing, one happily flew over the truck as if it wasn't even slightly rare. That was one good sighting and immediately had us rethinking our excuses for a half-planned trip to head for Verangerfjorden in north east Norway at some point where gyr falcon are reckoned to be a certainty.

We were settled for the evening but at about 10.00pm a Lake Myvatn warden appeared in a 4x4 (we were miles down a rough track and had forded a river to get to where we were) and explained that it was only permissible to overnight in controlled areas around the lake, ie campsites. I wasn't that surprised as this entire area is heavily touristed and we completely get how it's desirable to retain some control: even over very well hidden tourists. And so, we quit the area and drove a few miles away where a rough track off the main road (coordinates shown) became our latest home.

The pic is from the truck window at 11.00pm and shows the sun just hanging on to the horizon where it stayed for ages before finally disappearing. It's not even as dark as the picture suggests - the camera has adjusted for exposure - it does give a rough of  idea of how dark it ever gets here at the moment though.

PS Saw two more red-necked phalaropes today and had a really good ptarmigan sighting too as we drove over some upland from the coast this morning.