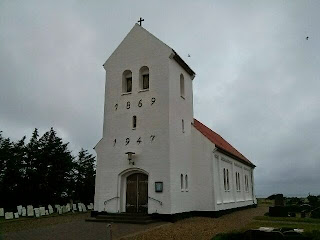 Well, disappointingly, Denmark hasn't disappointed. When we left here from our wettest, coldest, most miserable ever bike tour three years ago it was steely grey and throwing it down: it still is. There's little to indicate it's ever stopped raining. It's just as we remember, unspectacular in any way and very, very grey.

At least the people still seem pleasant. Not that long after landing we found a huge retail park and I started a rain-soaked trog about to try to find some springs for the throttle return. After three  unsuccessful store attempts, notwithstanding very helpful Danes, I found a couple of packs in a DIY shop that I might be able to work up a bodge with. Expensive though, about £9.50 for something that might be half that price on a bad day in the UK.

Filling with diesel was less painful at about £1.13 per litre, irritatingly though, within five minutes, we saw some at about £1.08/litre. Bum!

Currently stopped at the location shown near a pleasant church which houses some commonwealth graves and is so far very quiet. We're near plenty of bird life too being so close to the sea and amongst a predominantly dune-based habitat. If only we could leave the truck without getting absolutely drenched.