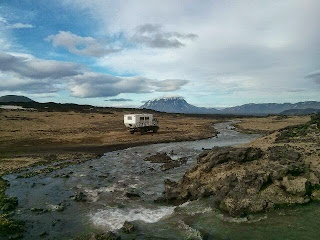 Shortly after setting off from last night's overnighting spot we found one of the Norwegian biker's bikes abandoned at the side of the 'road' with all the luggage still attached. It seems the clutch failure returned to haunt him. We felt sad for him and hoped all would turn out OK.

More fords were encountered soon after and one was particularly fierce with a very fast water flow and an extremely rocky river bed. Even Icelanders in smaller SUV type 4x4s were baulking at attempting it. The truck just got on with it but the ride was extremely rough. I didn't dare lose impetus in case we sank into the gravel so we bounced and banged our way through, I'm sure the onlookers waiting for their attempt thought it looked easy for us but it was definitely a white-knuckle ride in the cab.

The track for the next 80K or so meandered through absolutely stunning scenery that just left us constantly and silently amazed. From lava-field based moonscapes to mountains and angry glacial rivers the country just gave up absolutely awe inspiring beauty at every one of the hundreds of twists and turns. It didn't matter that, at times, the going was a little tricky with huge rocks, washboard surfaces, and fine windblown sand conspiring to bog us down.

I had wondered how the truck would cope with being constantly immersed in its own trail dust (and that blown across the open country on the wind) but am pleased to report that hardly any gets into the cab or box. All the attention to detail with seals etc seems to have paid off.

Cap-doff of the day went to a lone push bike tourist, fully laden and miles from anywhere, slogging against the incessant dust clouds whilst grim-facedly suffering at every pedal stroke on the challenging rocky/sandy surfaces. All I could do was hang my arm out of the window and give him a massive thumbs up. Hardcore.

We gradually gained height through the day and as we did lost most vegetation and bird life. Speaking of which, I can confirm that yesterday's waders were purple sandpiper, we saw more earlier today. One solitary snow bunting provided the only animal life in recent hours and that was right on the lip of today's destination, the sulphurous pool of 'Viti' (hell) at the site of Askja Caldera.

This area is a massive tourist attraction and with good reason. It's spectacular and is home to the deepest lake in Iceland at 217m. We ploughed a 2.5K walk through snow to view it and were only slightly disappointed that the adjoining 22 degree C water of the geothermicly active 'pool of hell' was roped off due to treacherous conditions hiking down into the basin in which it stinkingly festers.

Fully exhausted from being dangerously over stimulated we've called it a day close by, at the location shown and pictured. The surroundings are in no way a disappointment.