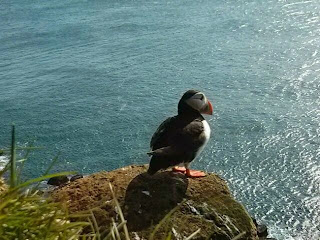 Check out the westerly coordinates!

We didn't hang about much this morning as I wasn't sure how long it would take to follow the sinuous road along the coast to Látrabjarg cliffs, the most westerly point in Europe. I'd read the road was potholed and slow, with many twisting climbs and gravel sections.

As it happens - though some sections to cover 5K as the crow flies maybe took five times that distance to drive - it wasn't too bad and every single bit of the journey brought genuinely astonishing scenery. Huge sea cliffs, a perfectly clear blue and green ocean, white sandy beaches, sparkling waterfalls and all perfectly presented in blue-sky-sunny weather. Cold though, 6°C (presumably including the wind chill factor) appeared on one roadside information sign at sea level.

Only the last 30K or so of the journey was really bad, being heavily potholed, narrow, a bit precipitous, and carrying quite a bit of tourist traffic. Being the most westerly person in Europe is clearly a popular thing to want to be.

Once at the lighthouse at Bjargtangar, the vast cliffs, enormous seabird colonies (the largest razorbill colony in the world is here), and sunbathing grey seals provided plenty of interest and widely dispersed the couple of hundred or so people who had made it.

The sea cliffs are truly enormous and hold many species of seabirds in their tens of thousands. The puffins especially were very obliging and showed little fear. Quite a bad strategy really as for two weeks in each year locals are allowed to net them, which they do in their thousands for the dinner table.

Having been suitably awestruck by the landscape and wildlife we headed back east (no choice really) for just two kilometres where there's an area set aside for people to overnight. It's an unsupervised freebie, very pretty, has open ocean views, picnic tables, a food prep area, rubbish bins, and there's even a couple of pleasantly clean toilets with running water.

These bare-facility campgrounds aren't that uncommon in Iceland. It's difficult to see what direct benefit they bring to local communities / government as they must cost quite a bit to set up and maintain. It seems they are more about providing a public service than anything: hard to imagine such entities in the UK...