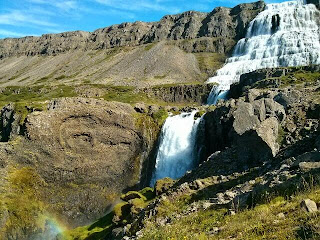 Another fairly early start today as we have decided to persist with a full circuit of the north west coastline, it's so gob-smackingly beautiful it would be a travesty to do it the discourtesy of rushing. And so we've continued with a roughly clockwise circuit and without any doubt it's already paid back in spades. It's vast, rugged, and not one minute has passed where we haven't been surrounded by sheer splendour. Even the weather has been on its best behaviour today, the skies have been clear blue and the freezing northerly wind of the past few days has largely disappeared. I've even been in shorts and T-shirt for much of the afternoon.

Just after lunch we reached the Dynjandi waterfall, as per the location and pic. It's a real cracker, probably my favourite so far in Iceland. The waters feeding it are non-glacial and are a crystal clear blue/green. With the sunlight on it rainbows appeared everywhere; magical stuff.