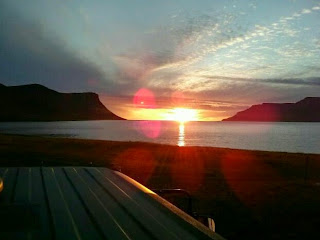 We were in rescue action again this afternoon.

Just over the top of one high pass we were flagged down by a Dutch fellow who, together with his wife, had tried to get to a flat bit of gravel for a picnic next to a pond. Trouble was the gravel was deep, loose and wet and he'd well and truly sunk his SUV 4x4 up to the belly.

Some Belarusian tourists had tried to get him out but couldn't, he'd been there for two hours.

The ground around was a bit soft so I had to pull his car from a less than ideal angle but it didn't matter, the truck easily plucked him from the mire. The Dutchies were incredibly grateful and wanted to buy us dinner but having at least a year's supply of Pot Noodles on the truck, plus an awkward interpersonal skill-set, we politely declined and tootled off.

Apart from the spectacular scenery we've seen many more beached boats today, this coastline is notorious and information panels dotted all over the place document the local wrecks and tell tales of heroic rescues: and failures.

Were staying the night at the coordinates shown, a little way short of our intended destination: time passed quickly today. Not far from where we are is another oddity, a beautifully kept walled French cemetery seemingly randomly plonked at the side of a dead-end gravel road alongside the fjord. I couldn't fully understand the inscription that ran around the entire perimeter so won't attempt an explanation for fear of injustice. Somebody clearly cares for it though, in spite of its obvious age, it's immaculate.

Pic is from front bed in the truck at about 11.00pm and we have the eerie and always slightly disconcerting cry of a great northern diver for company.