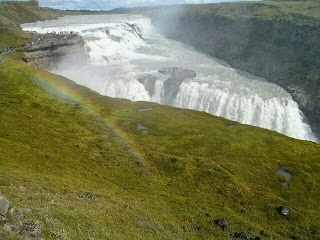 Having completed the Kjölur crossing without incident and thoroughly enjoying the mountains, glaciers, and desolation, we made the Gullfoss waterfall by lunch.

As did, it seems, almost everyone else in Iceland.

I was here in 1992 with an Icelandic mate and at that time a track led to a small car park where he and I alone marvelled at the falls. Today there is a huge metalled road terminating at a massive car park, sprawling visitor centre, souvenir shop, café, restaurant, a huge building dedicated entirely to toileting, and hoards and hoards of bussed-in tourists.

The falls have sadly become an extreme example of the view, brew, and loo model of countryside recreation management having been 'enhanced' to the point that render the very attraction itself almost incidental.

The falls themselves haven't seemed to notice that a whole industry has been created around them: neither did most visitors seem to particularly care. Far more people thronged the built than natural environment; the eateries and souvenir shops were crammed to the rafters and the queue to pay to use the toilet building was about 50 deep.