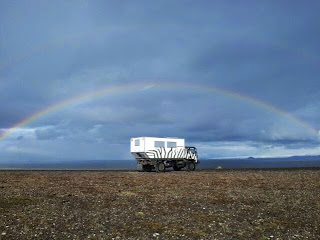 It's mainly been a day of covering ground. There are still lots of things we want to do around the south coast and we are now definitely on the back foot as far as our time remaining in Iceland goes.

An old nemesis raised Its head again today in the form of a diesel leak from a dodgy union. It's exactly the same issue as we had on our Ukraine trip last year albeit this time on the fuel feed rather than the return pipe. As a result its a little more sinister but there's little I can do in the field to make a full repair, it needs a new fitting. Fingers crossed that it gets no worse...

We're currently, as per the coordinates, about half way down the Kjölur crossing. This is the remaining long north/south crossing of the interior highlands we haven't yet done. Apart from wanting to experience it, it was a logical choice as it takes us conveniently from the fjords of the north west directly to our next attractions, the Strokkur geyser and Gullfoss waterfall.

The Kjölur crossing is all gravel and though it has a few washboard and very bumpy potholed sections, is so far comparatively straightforward. It could easily be done in an everyday 2WD car. We've just pulled up facing the very sinister looking steely-blue Hofsjökull glacier and hundreds of square kilometres of volcanic ash and tundra. It's very different to the sights and sounds of just 24hrs ago; all seems markedly austere once again, though we do have a few ringed plovers, the odd Arctic skua, and a couple of flocks of pink footed geese grazing on the tundra for company.

We've been trying to keep some training going and have managed a run or bike session every couple of days or so. There's just been a brief shower (pic) but it's passed now and we're both about to have a run; two layers on top and gloves are the order of the day. There's a good reason for the menacing presence of the glacier.