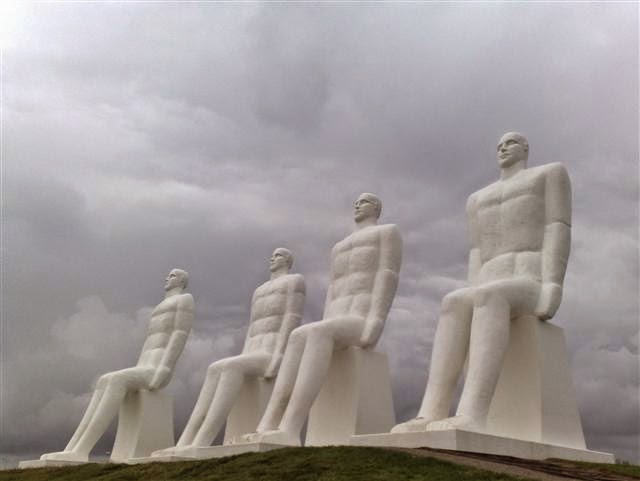 As yesterday afternoon rolled into evening  the condition at sea just got worse and worse. Seas were officially described as 'very rough' with gale force 9 winds. I've personally been on a boat in 'high' seas at storm force 11 but my nausea didn't differentiate. I felt dreadful and just went to my bunk and stayed as still as possible with eyes closed trying to anticipate and visualise the movement of the ship for many, many hours. Emma-the-Anxious wasn't affected by sea-sickness even remotely but at least I managed to sleep come (proper) bed time whilst she lay awake waiting for the ship to sink. A one-all draw I reckon.

It all came good in the end, by this morning the seas had calmed and we'd unsurprisingly stayed afloat.

Seeing the lines of overlanding vehicles waiting to board to start their adventure as we disembarked made us a little envious but we had little time to lament as we had cover most of Denmark pretty quickly in order to make Esbjerg for the final ferry back to the UK.

And cover Denmark pretty quickly we did. I even found time for a quick (slow) run, though truth be told I wish I'd not bothered. The nausea of the crossing  knocked the stuffing out of me and it was a lethargic, unpleasant struggle. Predictably, as is seemingly Denmark's wont, it rained, too.

On reflection, I may have just attempted to blame a month's worth of lack of training and eating lots of re-hydrated E numbers on the dubious notion of being ship-lagged.

And so we head for England. The pic is of four genuinely impressive giant white sentinels who - unfailingly watching the ocean just out of Esbjerg - purportedly represent mankind's original pure and unsullied interaction with nature (don't get me started); my own interpretation is they summon gods of rain, it's a hard argument to refute...