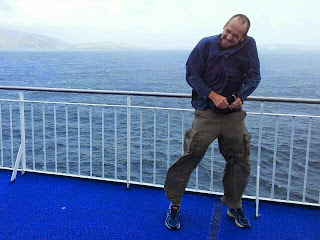 We're very much at sea and just passing the Shetlands again, this time from the south as the captain has decided to alter his usual course to try to miss the worst of the tail end of Hurricane Bertha.

No one ever wants to include the words at sea and hurricane in the same sentence.

Oddly, though we're being thrown about a bit the skies over Shetland are blue and the sun is shining. The bird life is again fantastic here and it's quite something to watch the gannets and fulmars particularly showing off their shearwater-family heritage by gliding effortlessly only millimetres away from the huge swell and waves. I'm sure there's some good reason to do with updraughts but it really does look like they're doing it just for the thrill of it; and to make humans feel inadequate.

Fair to say they are in control here, unlike the very many Norröna passengers who can't even stand upright on deck and are taking on various shades of green and grey. Emma's just fine, she doesn't get troubled by seasickness; I, on the other hand, am starting to succumb.

It's going to be a long 22 hours from this point: the skies ahead are dark with cloud and things are looking pretty angry...