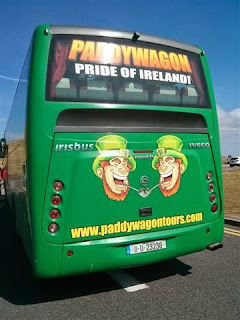 We're sitting at the port in Belfast now, waiting to sail to Scotland. The border crossing into Northern Ireland brought an immediate change in the quality of road surface and width, and suddenly all road signs and speed limits were back to UK imperial standards. It was starkly odd to be back in the UK - in Ireland.

Eire then, in a nutshell:

People are friendly. They stop and talk and spontaneously wave; quite without any affect. Many were genuinely interested in the truck and I've lost count of the number of times I've explained what it's all about. There seems to be less pent up tension than at home and more of a general air of respect and tolerance. Not once did we see any road rage or hear any crossed words. What 'yoof' we saw did not demonstrate any kind of yobbery and were more often than not wholesomely engaged. Many lads of prime yobbery age were seen trooping around in shorts with hurling stick in hand, on their way to - or from - a hurl-about.

Dogs in rural areas are often left to roam: this can be bad if you are into cycling or running. It also seems to be socially acceptable to allow dogs to bark well into the night - at least in rural areas anyway.

Roads are invariably narrow and often have very uneven surfaces. We got pitched around in the truck quite a bit. Add to the mix that the edges of many have heavily cambered drop-offs and it's easy to see how a trip into the ditch could happen, especially when squeezing over to pass oncoming vehicles. There are very few footways along the sides of roads and little space for the pedestrians who are suicidal enough to walk down them. On trunk roads there's often a hard shoulder demarcated with a broken yellow line. It's common - indeed expected - that slower vehicles will drive in the shoulder to allow overtaking manoeuvres. Note well though, a wide hard shoulder can sometimes disappear into nothing - or contain a cyclist/pedestrian. You have to have your wits about you when dangling across the broken yellow line.

It seems to be a legal requirement to have to babble away on a handheld mobile phone whilst driving, especially if driving is your profession. Scary.

Flora is lush and diverse but fauna, particularly bird life, is less abundant than at home. That said, less than usual stuff does crop up and even as I type I've just spotted eider ducks bobbing about in the harbour as happy - it seems - as if they were somewhere north of the Arctic circle. Landscapes range from benign to impressive and there's lots of open space.

Diesel is cheaper than at home, working out at about £0.95GBP per litre at the time of writing.

Overnighting off formal sites is easy and nobody seems even slightly perturbed by the practice. As always with this hot potato though, it's plainly a matter of courtesy to be discreet. Some honeypot spots do have 'No Overnight Parking' signs; it goes without saying that these are to be respected: doesn't it?... Height barriers 'protect' car parks everywhere from vehicles over 2 metres tall, itinerants/tinkers are fairly openly marginalised.

Taking a dog to Ireland from the UK used to be stress free. Since December 2014 EU regs have been enacted which now require that any dog coming into the UK from Eire requires a full passport - so it has to be micro chipped, have valid inoculations (including rabies) and subject to vet checks etc. The official line from Irish and UK government is that the law is black and white. On the ground the law is seemingly widely recognised as being the work of a pencil neck in Brussels justifying their existence whilst taking a break from the usual routine of defrauding expenses and so is roundly ignored. Not one person from the shipping lines, immigration, or customs gave the slightest hoot we had the whippet in tow.

Bookies are everywhere, as is Guinness - and leprechauns do exist (pic).

Hilarious idiosyncrasies abound through English eyes; but the Irish are often one step ahead, they have a wry
sense of humour.

My favourite Irish idiom is "Yoke". The word can seemingly be substituted for any noun at all. It took me a while hearing "that's a fair old yoke" to realise people were talking about the size of the truck - or Emma.