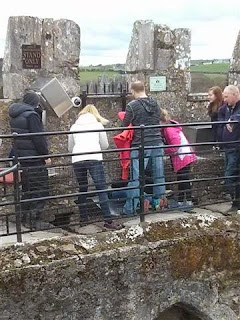 Last night's camp was a good one and we were treated to the calls of early morning geese as they came back to the reserve to feed from their roost out on the bay. It turned out Emma's swallow sighting was the first of the year for the reserve, and may even be the first for Ireland in 2015; one to check when we get home.

We had to cover some ground today. Though distances as the crow flies in Ireland are relatively manageable, the roads are narrow, twisty, and slow. As we hope to make the most of the southwest coastal area we had to spend some time trogging along a fairly major trunk road. Not the most inspirational morning then, but at least we cracked on a bit.

By mid afternoon we made Blarney Castle, home of the world famous Blarney Stone. The castle itself is pretty impressive and the grounds arguably even more so. There are all sorts of follies, arboreta, and flower and herb gardens; including one that contains just poisonous plants. Some of these attractions are genuinely impressive, some arguably err a little on the fairly cynical maximising-tourist-footfall side. Speaking of which, Americans and East Asians were dominant. Hardly any Irish accents prevailed...

Kissing the Blarney stone isn't that straightforward. A pretty claustrophobic spiral-staircased climb to the top of the castle gives access to the stone itself. Here, a 'grabber' has to hold the kisser's legs as they lay on their back and then slide backwards over a precipitous drop whilst clinging on to a couple of metal rails. With head inverted the kisser is then allowed to perform the deed and plant one on the hallowed stone. Zooming in on the pic shows one American 20-something inverted, pinned in position, and enthusiastically photographed whilst in the act.

We both did it and both rather wondered whether the promised gift of the gab was worth the trade-off for the impending viral infection of Japanese / American origin. Hundreds, if not thousands per day, must perform the deed. Odd things, humans.

After the castle we drove a bit further west and found a functional, if unspectacular overnighting spot (coordinates) that should make the southwest coast achievable by tomorrow afternoon.