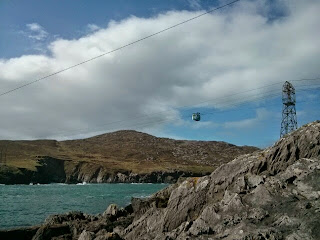 From our just-getting-our-heads-down camp we cracked on westwards and,  immediately, the landscape began to change for the better with the benign green pastures and arable being replaced by much more rugged and untrammeled vistas. The further west we went, the narrower and twistier the roads became and the more luxuriant the flora. The ancient trees are covered in lichens and every rocky crevice supports mosses and ferns galore. I suspect men with beards would declare we were in temperate rain forest.

Speaking of rain, there's none to be seen at the moment. Since about 10am it's been glorious sunshine.

As can be seen from the coordinates we've hit the west coast, were at the tip of Beara peninsula having an early afternoon laze about whilst watching the sea, birdlife, and an extremely precarious cable car servicing the barely inhabited island of Dursey.

After this laze about were heading back to the fishing port of Castletownbere from where we can supposedly catch a ferry to Bear Island - the home of a very esoteric parkrun. As has proved the case in recent times, once Emma gets a parkrun mission in her head, there's a certain inevitability about the outcome.