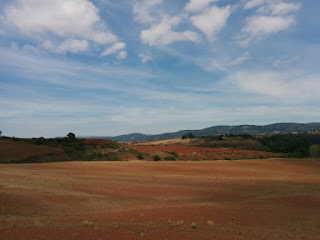 We started the day well with sightings of two short-toed eagles and what I think was a Montague's harrier. These were near our camp at the top of the Tarn Gorge and seeing them had us reconsidering our plans for the day.

We had intended just bumbling vaguely northward towards home but the raptors seemed like a sign. Nine years ago we were rushing back home from a trip to northern Spain and we passed through an area down towards the Pyrenees that was just teeming with birds of prey. We always said we'd spend a bit of time there at some point and had no excuses so we turned the truck south.

Well, you win some and you lose some. Nearly three hours driving took us bang into the hot spot and... nothing. I have no idea why but the area produced only the odd buzzard and kestrel.
Still, the landscapes around this part of France (not far from Carcassonne) are really beautiful and the D roads virtually empty. It was a pleasure to burble along at 30mph just drinking it all in.

As we drew a line under the raptor quest and started to head north we passed through a pretty unusual landscape that went on for about 30 miles or so characterised by bright red soils. The houses were clearly built in local stone as they too took on the same hue. It was redolent of the bright red soils of outback Australia. Unusual and pretty.

France does throw up massive diversity in so many ways, not least with its landscapes.

The truck's done everything asked of it so far and has happily kept climbing tough old inclines in 30°C plus temperatures. It's been down some pretty dodgy tracks and clambered over a few humps and hollows. After scraping through the gorge yesterday we thought the worst was over but the biggest test was yet to come.
Right at the top of a hill on a very narrow D road we came upon a tight village with a couple of crooked farm buildings that leaned into the road from both sides. It looked like an improbable gap, especially at roof level where they encroached the most.

Reversing down the narrow and tricky hill was my immediate thought but a tractor towing a trailer had appeared behind us in that way that such things do in times of crisis. Mirrors folded in, Emma jumped out, went to the front and at about half a mile an hour I gingerly headed for the gap. Her face and frantically waving hands said it all but in spite of my intuition we made it though. The tractor driver couldn't quite fathom it, we were clearly very, very lucky. When we'd calmed down a bit I asked Emma how much gap we'd had on either side of the roof: she held up her fingers and thumbs indicating about 5mm either side.

Tomorrow we are going to drive on some motorways.