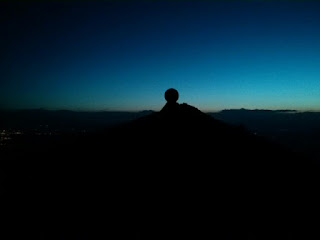 Pretty soon after leaving last night's camp we were prisoners of the Rhône valley. We had to cover ground and there was no real option but to stick with the southbound 'N' road that tracks the mighty river. For about 150km it was constant heavy industry and workaday towns, non of it very inspiring.

The occasional mediaeval fortress or wildlife sighting broke up the monotony but it's fair to say it was a day of just getting it done.

The afternoon tea stop proved the most interesting of the day with a clear stream revealing huge fish stocks, including what looked like numerous trout of about 18 inches in length, a couple of kingfishers fishing and a female red crested pochard with a this-year's juvenile in tow.

By about 4.30pm we caught our first sight of Mont Ventoux standing huge and alone in the Provence landscape. It really is quite a formidable thing and can be seen from dozens of miles away in all directions. It seemed to take an age to reach and then a further hour to ascend in the truck. It's steep, relentless and huge.

We're staying at the top overnight at the coordinates shown. The views from here are spellbinding: it's possible to see for countless miles in every single direction. About 50 miles to the north east we can see electrical storms in the Alps, whilst as far as the eye can see to the south are the twinkling lights of civilisation. Emma had it right when describing it as being just as if we're on a plane.

As per the name the wind up here is indeed relentless. It's supposed to be one of the most consistently windy places on earth with winds of over 50mph on at least 240 days a year. Tomorrow morning we intend to freewheel down it and then cycle back up to the waiting truck. How hard can it be?