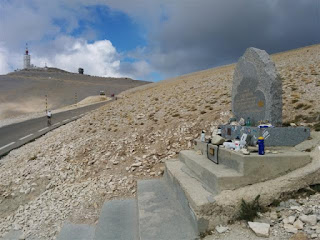 We made an early start and freewheeled all the way down the mountain to Bédoin. It took about 35 minutes to get to the town, the start point for the most famous and well-used ascent of Ventoux over the history of the TdF.

On the way down we passed Tom Simpson's memorial. It really is in as desolate a place as its reputation suggests and it's just very sad to see how close he was to the top before his untimely demise. Strange to think he lived close to us and met his infamous end so far from home, surrounded by hundreds but very alone. He isn't forgotten though and many people stopped while we were there, there's also lots of recent cycling memorabilia left on the memorial stone - the story clearly touches many people.

The climb itself is hard. It's 21km, steep and relentless. It rises to 1900m by the summit and you feel every one of them. Hundreds of cyclists were giving it a go ranging from fully carbon equipped race-types to much more humbly equipped recreational cyclists. There were even a good number of people running the thing!

Once the steep sections started it was common to see people off and pushing: for them, it was going to be a very long day.

By the very steep and exposed-to-the-elements finishing 5km I was pretty stuffed and it was this section that eventually saw Emma off and alternating a ride / push strategy to make the summit. She would have ridden the whole thing had she had access to a gear or two lower. It's definitely a  twiddlers' rather than a muscle-ers' climb.

After a clean up we made our way off the mountain and parked up, still under its shadow, to have a well-earned easy rest-of-the-day (coordinates). It's been quite good to loaf about in the 30°C heat listening to the cicadas and lazily recover.