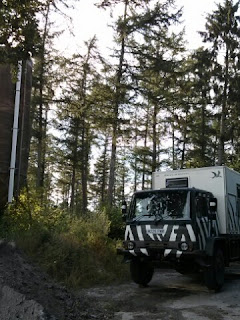 Hamburg tried to trap us.

We covered good ground after leaving last night's camp (which was awesome) and approaching lunch decided to flirt with the outskirts of Hamburg in order to buy some fresh bread and fill up with diesel.
It was a mistake. It drew us in with the irresistible promise of an Aldi - which, as it turns out exists only in Garmin's database and not on the ground - and then played with us. A million one-way systems, roads closed for roadworks and many seemingly arbitrary 2.1 metre width restrictions saw us pointlessly lose almost two hours of life. It really shouldn't be that hard to buy a loaf and some fuel in an advanced western city.

No judgement here, but the bit we got stuck in was also very heavily populated by people that were obviously of north African descent. It's the first time we've personally witnessed first-hand the enormity of the cultural shift afoot.

Post-Hamburg Germany was pleasant, clean, and highly organised again and we intentionally baled from the trunk roads and bumbled through some enviably gorgeous little towns and villages in order to purge the hideous city experience.

After not too much purging we felt much better and, having found the quiet dead-end spot at the co-ordinates, decided on an early finish. We've lazed here since mid afternoon and have spotted some decent birds. Best sightings have been crossbills, red-backed shrikes and a nightingale. This was a real treat as nightingales are rarely seen. I saw it flitting through woodland (pictured behind the truck) and dropping into dense undergrowth with a bill full of food. The demanding calls of young followed and then the adult reappeared, obligingly perched on a branch for a few precious seconds, and then skulked off back through the woodland.

As the evening drew on we were also treated to the melodiously and slightly eerie honking calls of a pair of cranes from an adjacent corn field. Their calls resonated and echoed around the landscape for miles. Great stuff.

Cicadas also joined the party as night drew in and as I write we're being treated to the pleasant cooling effect of a storm rolling in and the always-strangely-comforting noise of the truck's roof being pelted with big fat raindrops.

Early start tomorrow - we have a ferry to catch.