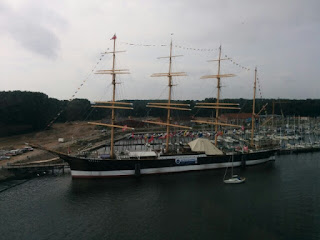 Last night's camp was a super-quiet one. After dark the only thing we heard was rain on the roof. No cars, no people, no more haunting crane cries, nothing.

An early departure saw us at the ferry port at Travemünde by 8.00am. En route we passed though a number of small towns that were - in spite of being simple workaday places - absolutely pristine.

In one, at about 7.15am, were four hi-viz wearing workers weeding communal flower beds at full tilt - it was like speed-gardening. It reminded me of a scene I witnessed in England a couple of weeks ago. Three council flat-back trucks were parked in close proximity to a small flower bed and a scrum of 8 council workers were gathered around, hands in pockets, presiding over one further worker who was at least half-heartedly poking about with a trowel in a concrete trough.

The Germans seem to have a very different take on flower bed maintenance...

Travemünde proved to be a very pretty place once out of the inevitable large-port infrastructure and was festooned with tall ships. No idea if these are to be found here all the time or whether we stumbled across something of an event. Either way it was a pleasant sight.

Steaming towards Malmö now, as per co-ordinates.