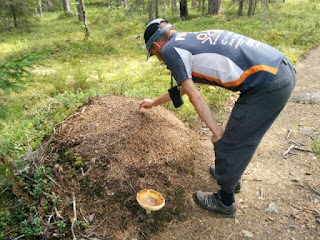 After a lazy breakfast and idly watching the resident black-throated diver I did a short run. It was grand to run through the forest along the banks of the lake. Whilst out, I saw some kind of sandpiper but didn't get a good enough view to ID it before it flew away, peeping madly - as they do.

The day's drive has been on quiet roads but that hasn't prevented us sighting about half a dozen more immaculately presented American classic muscle cars, including a mint mid seventies Stingray.

Also to be found on the main roads is the occasional roller blader and freestyle roller skier. The roller skiers in particular take up a huge amount of carriageway but it doesn't seem to fluster the local drivers one bit. I can't imagine such an activity being so calmly received on the UK's road network. In fact, it'll never be an issue. Our potholed roads would scupper the ambitions of any would-be skier anyway.

By late afternoon we'd reached the next national nature reserve on our list: Pyhä-Häkki. This is known for its ancient pine forests and bog / mire habitat. The richness of the flora is awesome. Layer upon layer of lichen and mosses cover just about everything. There were some pretty spectacular ant hills in the forested areas too (pic). Though birdlife wasn't massively abundant we managed to catch brief glimpses of Siberian jay. We saw three in total, the first time we've ever seen this species.

From the reserve Emma went out on the bike and came back with the news she'd found another top lakeside camp. And indeed she has (co-ordinates). The silence here is eerie and is broken only by fish jumping and the occasional distant calls of cranes.