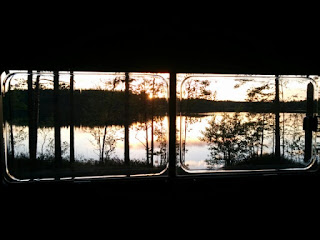 The day started well. Emma found a series of paw prints on a track near the truck that were left either by a big dog or wolf. The reserve is just about into wolf territory so who knows.

On quiet gravel roads leading away from the reserve we had a really good goshawk sighting and then, not long after, chanced upon a lake with 3 adult and 3 juvenile red-necked grebes. We stopped the truck and scoped them for a while and even saw one of the adults catch and feed a fish to one of the young, and also saw yet another juvenile hitching a lift on an adult's back.

More classic cars, some classic tractors, roller skiers, and the omnipresent pine/birch forests and lakes made for pleasing company as we continued to potter generally northeast.

National-park-hopping saw us arrive at our latest overnighting spot in the Tiilikkajärvi national park (co-ordinates) at about 6.30pm. Emma went for a spin on the bike while I checked the truck's levels and checked for water / contamination in the sedimenter bowl. All was well, not even any oil consumed.
Whilst messing on the truck in the still-hot early-evening sun I was at least treated to a pair of waxwings flying overhead.

We're well into lynx, wolf, wolverine and bear territory now and all are reported as occasional sightings on this reserve.

Tonight we intend to sit up with binos until dusk (about 11.00pm) to see if we can drop lucky.