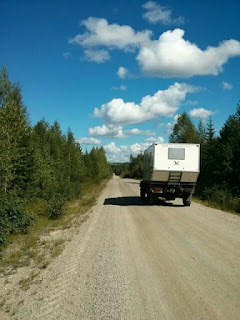 Truth be told, though we're seeing some interesting stuff, we're really having to work for it. Animal life generally is very sparse. It's possible to spend ages, even in national parks, and not get even the merest glimpse of any kind of bird.

Case in point, we had a wander round the park this morning for about an hour and in all that time only managed to get the bins on half a dozen birds. We did see yellow wagtails though, which was nice.
Frustratingly, because of the heavily wooded nature of the terrain it's often the case that even if we do get a glimpse of a bird flitting in the trees, and even continue to hear it calling, we'll never actually see it again. Of course, these are nice 'problems' to have.

Gravel roads and slightly more open landscapes have dominated the day's drive (pic) and in the part of the country we've been in today we've been very much on our own. In maybe a hundred miles of gravel we saw only about ten other vehicles. Oddly though, or maybe not by now, one was a mint 1970s Hillman Imp. More generally, we're not seeing many other foreign tourist. In fact, in all the time we've been in Finland, we've seen only three German registered motorhomes and one Norwegian.

Not long before we parked up for the night (co-ordinates), we had to stop for bread and in a supermarket car park we were approached by an incredibly enthusiastic youngish couple who had genuinely never seen an overlanding truck before. The female of the pair was obviously hugely interested and in spite of an obvious lack of confidence and limited English was determined not to let the moment pass. We showed her round, she was very grateful, I'd like to think we've helped with the spark of an idea for them.

The camp tonight is extremely close to the Russian border and is amongst really promising terrain. We also, unusually, have some good open views. I've been on the roof of the truck for a while already and though we've seen another goshawk and a redstart, mammals continue to elude us.

Though mammals are shy, insects are pretty abundant and today's been particularly good, perhaps due to the hot conditions (it must have been high 20s this afternoon and in spite of the latitude it's 26°C in the back of the truck right now at 11.00pm). Dragonflies are extremely common, as are butterflies. Of the 'flagship' butterfly species we've seen, Camberwell beauties have been the most striking. These are a first for both of us but they're pretty common here. Speaking of insects, there are also lots of bitey and stingy things.