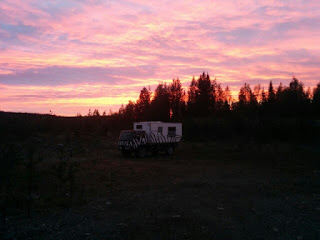 North of the Arctic Circle now.

After leaving the waterfall we drove steadily north, stopping off at a swimming spot just into the Arctic Circle for a cup of tea. A couple of kids were happily swimming and diving into the lake, seemingly oblivious to the fact that it should be too cold.

In fact, it wasn't. I was a bit surprised at just how uncold it actually was. It was definitely do-able in trunks alone.

We're at the co-ordinates shown now (pic) and have decided to overnight here. We'd normally not stop this close to a trunk road but traffic here is pretty much non existent and, as it turns out, we're amongst Sami.

When we first arrived, Emma had a scout about on the bike looking for our normal out-sight-out-of-mind type of camp but - whilst down a forest track - came upon three Sami people sitting round a fire and clothed in long bright sweaters to such an extent that all that could be seen of them were their eyes. They were very probably not attempting to terrify passing tourists but simply just fending off mozzies. Indeed they were welcoming enough, immediately offering her a reassuring wave.

After the shock, she perceived absolutely no threat but it did change our plans. We were going to venture into the forest in the truck but don't want to show any disrespect if Sami are doing what ever it is that Sami do in the area.

Sami trump tourists. Or at least they should.