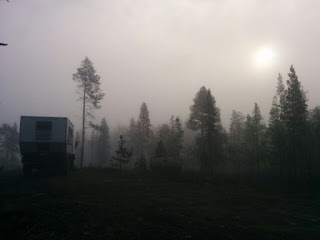 The nature of the road traffic changed pretty soon after we'd set off this morning. We've tried to stick to back roads this past week but today we had little choice other than to take the only northbound road available to us for the final push to the Finland / Norway / Russia border: the arbitrary target for this trip.

The trunk road north of Sodankylä was suddenly all about tourists. We saw bikers, cycle tourists and loads of cars / caravans / motorhomes from a number of nations including lots of Norwegians, quite a few Germans and Russians, and then a smattering of Dutch, a Belgian and a camper van from Switzerland.

It's just speculation, but the trunk road is a logical one to use for the honey pot of Nordkapp, which would kind of make the sightings make some sense. The road, in spite of some tourist-trap cafes and tat shops, was pleasantly scenic and tracked a huge river for much of the way. A couple of small nature reserves helped break up the drive and we spent some quality time on a watch tower in one particular reserve where we spotted about a dozen cranes, a really big six-pointer reindeer stag (a wild one - no collar) and a spotted flycatcher.

When we reached Ivalo we baled from the tourism super-highway and 'normality' immediately returned. No more traffic, gravel roads and hardly anyone to be seen (though Sami settlements featured quite a bit).

The landscape for the last 60km or so after Ivalo right up to the borders has been stunning. The vegetation is now comparatively sparce with only stunted trees able to prosper. The topography has been increasingly hilly and the land is occasionally strewn with mesmerising lichen and moss covered boulder fields. The numerous lakes continue but are even more picture-postcard appealing as they're invariably dotted with idyllic-looking islands. It's very, very pretty: easily the nicest part of Finland we've encountered.

And so we find ourselves as close as it's possible to legally get (without a permit) to the meeting point of Finland, Norway and Russia (co-ordinates). The last 20km of track before the Finish exclusion zone signs had been bumpy and isolated but easy enough in the truck.

To make the most of the area we had a bumble on the push-bikes for an hour or so and were lucky enough to spot a Siberian jay and a three-toed woodpecker.

The camp tonight feels pretty remote, we have only a Russian telephone network signal and not too far away we spotted a giant manned Russian observation tower keeping watch on the border. The exclusion zone here is fastidiously marked so we won't be pushing our luck. Weird-factor is increased by a spooky mist and endless daylight (pic).

The odometer reads 2328 miles from home; tomorrow we start the return haul.