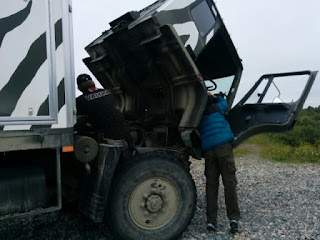 We're back on the road.

I went to meet the mechanic, Pertti - our knight in greasy overalls - at his garage as we'd been instructed by our awesomely helpful go-betweens and when he arrived and opened up at 7.00am prompt, I was relieved to see in his workshop a massive agricultural tractor; partially stripped. I immediately had confidence he would know his way around a commercial-vehicle diesel delivery system.

It was tricky to get our problem over to him though, he spoke no English and we, of course, don't need to be able to speak other languages because we're British. And so, through the mediums of mime and slightly embarrassing vocalisations, I 'explained' our issue and was thereafter bundled into his mobile repair wagon.

Once at the truck (about mile from his workshop) he immediately started going over the fundamentals of a full system bleed and generally eyeballing the entire system. He tried a couple of replacement copper washers on the fuel filter head and cracked all the injectors to make sure we were fully purged. The truck, though, still stubbornly refused to run. I was concerned that he seemed concerned. This clearly wasn't in his plan. He seemed happy enough with the lift pump and so worked back from that to the fuel tank. We both rolled about on the gravel under the truck for about 5 minutes whilst I continued to mime what I'd done over the weekend to try to bypass possible dodgy fuel-line fittings. I also showed him the weeping fitting that we'd suffered in Iceland two years ago - since replaced of course - but which again (as reported earlier in this trip blog) had started to weep back at Malmö two weeks ago. He clearly decided this was worth eliminating so ripped the pipe and fittings off, and with a simple "I go" (turns out he did have some English) jumped in his van and, did indeed, go.

I hoped he intended to return.

Only 5 minutes or so later he did, brandishing a brand new pipe complete with crimped, rather than push-fit fittings. After this was fitted and another round of bleeding, the thing finally burst into life. It was as simple as that. The tiniest of air leaks - very probably down to the push-fit fittings that seem to be a constant source of grief on our model of truck - had scuppered us. I wouldn't mind but I've replaced all four of the supply system fittings within the past two years and even supported /double-sealed them with self-amalgamating tape. They've performed impeccably over about 9,000 miles and I honestly though they'd be good for a good few years. Clearly, they are unfit for purpose. I know other owners have replaced them with crimped fittings and would urge anyone out there to do the same.

Once bitten, twice shy and all that, I immediately mimed to Pertti that I was keen to scrap the remaining fittings and push-fit pipework: he clearly got it. He disappeared again and a few minutes later reappeared with another new section of pipe, complete with crimped fittings, which he fitted in pretty short order. (It turned out that a totally anonymous looking shop - as are most shops in Finland if you don't know Finnish - that we could actually see from our place-of-strife was an agricultural vehicle supply shop. I so wish I'd known.)

Bish Bash Bosh. Two hours and two brand new pipes and fittings later saw us good to go for the sum of 200 Euro.

And so we went. We've put in about 400km today to try to make sure we stay within reach of Friday's ferry from Malmö. In spite of covering ground we had some decent wildlife sightings en-route including a white-tailed eagle.

As per the co-ordinates, were back in Sweden now. We thoroughly enjoyed Finland and all of its quirks (there are many). It's absolutely worth a visit. The gravel roads particularly make for some wonderfully scenic and utterly unstressed driving. The country has given us some genuinely memorable experiences - the far north is especially appealing. The people we've engaged with have been great, there's virtually no sign of anti-social behaviour (apart from people still wearing shell suits) and the outdoors scene is just massive. The attractions are many and varied, if not immediately obvious. The language is utterly, utterly impenetrable though. Couple this with the Finns propensity to very much keep themselves to themselves, plus the massive cultural divides, and it's possible to feel very isolated - as I did on my bike tour many years ago.

Our only fail was not spotting one of the big and scary predators.