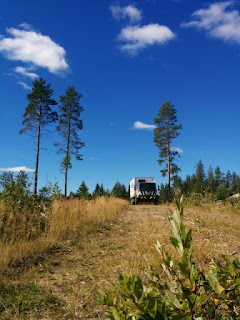 As predicted, today was dominated by having to make up time, as will be the next couple.

We've reduced our latitude by somewhere in the region of 500 miles since yesterday morning and have basically driven back into summer. The birch trees that were all but fully brown and shedding heavily at a latitude of about 68°+ are still in full leaf where we now find ourselves. Also, the temperature is amazing by comparison. We were regularly seeing 6°C in Kittilä but are now back well into the 20s. We're also seeing a return to something like a day and night. For the past week we've only experienced either full or dimmed daylight.

In spite of the emphasis on regaining time, we've still managed to reach a national park and have spent the last few hours enjoying it, we're also going to kip here (co-ordinates) We've done a pretty decent walk  and spent some time just gazing around. It's a real gem. It's called Skuleskogen and forms part of a geological area of great importance. It's the highest ground-lift area in Sweden and the area also boasts the deepest part of the Baltic Sea.

After the last Ice Age, and as the ice retreated, areas compressed by ice sheets were able to rise again and this area lifted the most (and is still rising). It's also regarded as the country's biogeographical crossover point where northern and southern flora is at the extremities of its respective range.

The high ground is impressive and has exposed cliffs and ancient woodland. There's supposed to be lynx and pine marten here as well as more usual species. We found a couple of beaver dams and a lodge entrance whilst wandering about but they were abandoned and bore no recent signs of the animals themselves.

The truck thankfully seems back to its usual self just uneventfully plodding on in whichever direction it's pointed and shrugging off whatever road / track / trail we ask it to tackle.