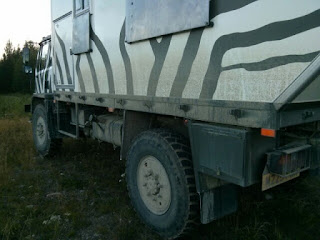 Another serious ground-covering day which was made less arduous by the fact we've had our first really poor weather of the whole trip. Since late morning there's been a cold northerly wind and it's rained almost constantly.

The scenery's been good though. The morning saw pleasant seascapes out on to the Baltic and after leaving the coast and cutting inland we've since been accompanied by hours of very pretty heath and forest habitat. We've seen loads of sparrowhawks today jinking in and out of the trees, central Sweden seems a definite stronghold.

Absolute highlight though was spotting a pine marten - a first for both of us. We were driving alone an anonymous bit of road with pine / birch forest both sides when the beast came trotting out of the woodland to our right, straight across the road, and disappeared into the woodland to our left. We had a brilliantly close-up look at it for going on 10 seconds.

Once again, we've spent hours in national parks scouring every last nook and cranny without success and then, lo-and-behold, bingo! Clearly, all you need to do here is potter down the road and the rarities come to you.

Tonight's camp (co-ordinates) is pretty random. We just dived down a forest track after I became ratty with driving. It's pleasant enough though, with good open views over some scrubby clearfell.

Thanks to the long day today we're now looking good for Malmö, we might even get to loaf about a bit tomorrow.

Especially for Brian: it's OK to gather a little dirt. We're showing 3,272 miles on the odometer now and the gravel roads mean the truck is well overdue a rinse.