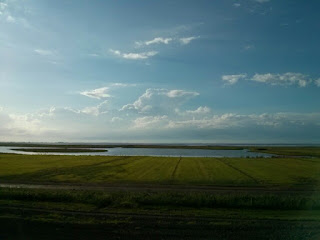 Last night's ferry didn't dock until almost 1.00am and by the time we'd cleared the port it was about 1.30. We were tired and so, with the help of the sat nav, I followed my nose out of the port and into a series of quiet looking lanes where we were lucky enough to score an informal bit of rough ground nestled within some woodland. A trucker had done the same and snuck in with his tractor unit. It seemed we were in experienced company.

It proved nice and quiet and in the morning, just as we were getting ready to leave the trucker came over to us - all smiles - and in broken English said how much he liked our truck. It turns out he was Serbian, owned his own tractor unit and just plied for trans-European business on a totally ad-hoc basis around the port of Travemünde. He was accompanied by his Greek wife in his Bulgarian-registered rig and told of how they got on well with the tramping lifestyle.

He was genuinely affable and kind enough to invite us to his truck for "NESCAFÉ or cappuccino".
Though moved by his generosity we politely declined; partly because we know our limitations when it comes to social interaction but mainly because the Greek wife had by this time made an appearance from his cab and was taking a morning dump in the bushes far too close to us to maintain any dignity or decorum.

And so we bade a polite farewell and hit the roads of Germany. We were instantly tipped on to an autobahn and it all seemed very frenetic after the scarcely trafficked trunk roads of rural Finland and Sweden. We soon got into the groove though and after refuelling on comparatively cheap German diesel we made some ground.

Which brings us to our current position at the co-ordinates shown. We're bang in the thick of things in the Lower Saxon Wadden Sea National Park (Nationalpark Niedersächsisches Wattenmeer), which forms part of the incredibly important shallow sea / mud flat coastline that runs from the Netherlands to Esbjerg in Denmark. In places, the mud flats only lose a few centimetres of elevation over a hundred metres, so when the tide's out, it goes out for miles. This leaves the mud flats open to exploration by all manner of birds in their countless thousands and as well as being important for breeding it's vital during migrations.

It really is, even now (at a pretty quiet time of year for birds) absolutely teeming. After having to work very hard for occasional fleeting glimpses in Sweden and Finland it's a very welcome change.

In spite of the abundance, I've seen no rarities, but it was good to see great white egret in decent numbers. I also spotted a hobby that had a half hearted swoop at a grounded pigeon before apparently changing its mind and calling off the attack.

I had no clue, and it would be hard to guess from casual observation (pic); but it's claimed that in terms of biomass, this is the second most productive habitat known after tropical rainforest. That's one heck of a lot of slimy mud-burrowing things!