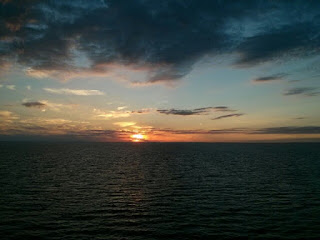 Well, we made Malmö. There were certainly times during our enforced stop in Lapland that it looked highly improbable but things thankfully worked out OK. It was a bit of a nuisance having to rush central Sweden as a result of the hold-up; especially as I'd had a couple of national parks lined up, including one that features a bear and wolverine hide.

Not to worry though, the trip has allowed us to see great tracts of both Sweden and Finland and I think we've now seen most of mainland Scandinavia's major habitat types (we did the northwest of Sweden in 2008 as well as the bottom two thirds of Norway so have already covered the uplands).

The very top of Norway - especially its easternmost point - is something we'd still like to do, though, and of course it was our original aim before DFDS messed up our original freight crossing.

We've had a talk about it and on reflection it may have opened up an opportunity. We're both desperate to see the northern lights and so are now contemplating an off-season trip to the far north. October/November or February/March would throw up the best chances and would certainly give a different perspective.

At sea now as per the co-ordinates and watching the sun gradually disappear.
Germany tomorrow...