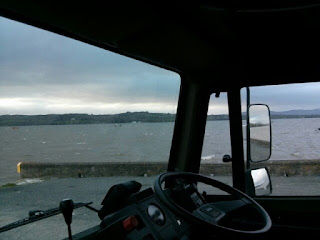 A steady drive from last night's overnighting spot saw us arrive at Cairnryan in plenty of time for a bit of impromptu birding.  We saw guillemot, black guillemot, rock doves and eider duck amongst more common species.

The port was quite heavily patrolled by the national Scottish Police service and quite a few cars and trucks were randomly searched. Not quite sure what the issue is between south west Scotland and Northern Ireland but there's clearly something afoot.

The crossing was smooth enough and upon landing at Larne we hot-footed it - in a really slow-truck kind of way - to Londonderry / Derry (depending how you see things) and over what will soon be a European border into Eire.

A long day and an approaching night saw us pull a random spot off the map overlooking Laugh Swilly to consider calling home for the night (pic). We'd normally have spent a bit longer finding more rural surroundings but Emma felt rough and I was tired so we decided to take a chance and hope our proximity to nearby towns wouldn't bite. Unfortunately intuition played out and after nightfall a total of 4 vans / cars came and went. The last two were full of yoof who - though completely harmless - we're nonetheless pretty noisy.

We lived-and-let live for a bit but by midnight the party was in full swing so we took the decision to bale. This is something we very rarely need to do but this was an occasion that we needed to do it.

As I fluffed around the truck and fired up the motor the lads came over and said they'd not realised we were in the truck and seemed genuinely concerned they'd bothered us. It was all very convivial and I almost found myself apologising for being irritated at them enjoying themselves doing whatever it is four lads in one car do on a rough piece of ground overlooking a lough after midnight in Ireland.

Anyway, we parted the closest of friends and found a pretty rubbish lay-by to kip in.

Tomorrow we'll be in our more usual position of being well away from urban sprawls so hopefully normal service will be resumed.